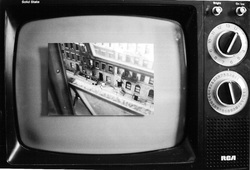 - an installation containing manipulated photographs, a painting, and a short narrative, the work is loosely based on a mid 1990s trip to New York although the narrative itself is fictional.


On a Sunday morning in Manhattan, a tourist looks out of her hotel window and sees someone looking back at her. A teenage girl in a fast food uniform is giving her the finger so she quickly looks away.

And sees two men on the street below, loading baseball equipment into an SUV. She finds them charming in their uniforms as they call up to their wives who pass them things through an open window. The building is a five-floor walk-up, reminiscent of the Honeymooners apartment. It seems to the tourist that the scene also recalls a Norman Rockwell version of America which has supposedly been lost long ago, and it seems also to the tourist that they are living a neighbourhood life with so-called small town values right in the middle of Manhattan on 58th Street. Here it is, Sunday morning, the sun is shining, and they are going off to play ball.

She wants to take some pictures of these genuine New York “natives” so throws on her clothes, grabs her camera, and hurries down to the street behind the hotel. It looks a little different at ground level, but amid the clutter of show bills and graffiti, she finds them and asks to take their picture.

At first they refuse, but she is persuasive. She tells them she is Canadian and would love to show the folks back home that New York isn’t all filth and muggings behind its candy apple surface.

“Go on, get your mug shot” laughs a woman upstairs.

“Get something for the baby to remember you by,” adds another young woman who has propped her very large belly on the window sill. Housed in an immense T-shirt it says “Baby on Board”.

Eventually an agreement is reached, a pose is struck, and the woman has her souvenir. The men load their gear and are off. One thing leads to another and the women upstairs want their pictures taken too. They invite her up for coffee. She is as exotic to them as they are to her since they have not traveled further than New Jersey. They show her family pictures of babies, graduations, grandparents, weddings, all displayed on the mantle in the living room over the fireplace that doesn’t work. This charming interlude is interrupted when someone’s mother calls to see if they are still coming for Sunday dinner.

The tourist suddenly remembers the time and a warm farewell ensues. They trade addresses and try to pick out her hotel room window. Since she is leaving almost immediately there is no chance for further plans but she insists that if they ever come to Toronto etc etc.

Within the hour her bus is speeding north toward the Catskills, and she is regaling her friends with her story. For a few years she sends them cards with a little note. They smile and put it on the mantle. When they think of it they sometimes send her a printout of themselves, which she uses as visual aid for the tale of her New York adventure.

And then gradually the memories slip away until they become before,

and now it is after. □