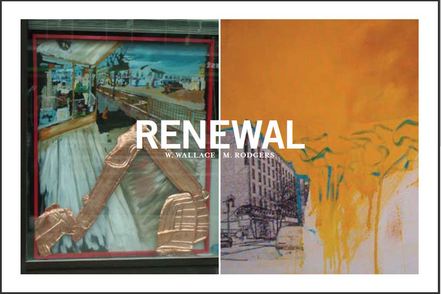 Rodgers and Wallace would undertake an Oshawa street project in April of this year, in order to expose/articulate commercial change within civic landscape. Oshawa has been and remains an important industrial centre as well as a base for a suburban economy.  This body of work is based on hopes for urban renewal in a beleaguered yet feisty city core. Wallace would paint what could be seen from inside a transparent box, until the artist herself had disappeared behind her painted images. Rodgers would produce a series of photograph/painting hybrids based on Oshawa’s downtown, working in the display window at Brush Strokes and interacting with passersby. In addition, a collaborative sound piece would be broadcast from the site.

Our hosts were Anna and Newell, proprietors of BrushStrokes.

This is what we said we would do.

On the Friday before the project is to begin I see the local paper and learn that the street we will be working on is having major reconstruction. Oh well, these things don’t usually start exactly on time, and we are in the middle of the block so maybe it will take a while.

Hanging in my window is a mechanic’s coverall that once belonged to someone named Art. I bought it years ago at a flea market because of the name, and because its size 50 allows me to climb in and out of it easily. And, like a Mesopotamian temple figure, it can stand in for me when I am off site. A laboured idea, this signifier.

While the Art coveralls are ceremonial, the rest of my props are the real thing. Essentials of my home studio have been transported to this location and on display to show a piece of life as a working artist. The bulletin board displays an accumulation of detritus that includes random thoughts, jokes, photos, postcards and small artworks. Tools of the trade are a work surface supported by its Black & Decker Workmate, water pail, easel, brushes, rags, Styrofoam meat trays and of course lots of paint.


And then there was reality.The street is blocked off completely and side access roads are only for local traffic.

Wendy is not bringing her transparent box today because of the street work and the bad weather, but as the day progresses the sun comes out and she changes her mind. She goes home to get it and while she is there a tremendous thundershower descends.

Interesting people come and go – an engineer from Whitby tells me the best chiropodist in the country is up the street. We talk about the crisis in Oshawa’s rotting inner core and I learn many things, not only from him but also from others who pass through and make comments about the Shwa.

Here are some of them:

1)     The new courthouse will make a big difference in the local economy.

2)     The new sport complex that is going in around the corner will make a big difference in the local economy. If 1000 people attend an event and one or two wander down the street the economic impact will be good.

3)     Oshawa Council should have been more forceful about refusing the methadone clinic permit.

4)     Oshawa has much higher property taxes than even The Beach(es) in Toronto.

5)     Costs escalate because of regional and municipal government duplication.

6)     The regional chair should be an elected position. The current one has been in power for a decade.

7)      The people should not elect the regional chair. Rather, the regional councilors who have a better handle on the performance should make that decision.

8)     The taking down of ACSYS was a benchmark re standards and will make subsequent deconstruction fantastically expensive.

9)     GM’s record on environmental cleanup is extremely good because it sold off its most poisonous operation and therefore its numbers went down without having had to actually make any changes in operation.

10) GM will not dismantle the plants in Oshawa because of the heavy environmental costs.

11) Low rise development is the way to go.

12) The Regent Theatre project will have great impact on the streetscape and we must start somewhere in terms of preservation.

13) The Regent theatre renovations are too expensive.

Many passersby tell us that they make art too, or used to, or hope to start. Most notable is an elderly gentleman from the seniors’ residence around the corner. He stops us in the street to tell about his paintings and I ask him to bring one to show us.

Returning from a break, we find workmen cutting into the asphalt in front of our space.

Inside BrushStrokes, they are clustered at the very back of the store in order to find a quiet spot. Wendy decides to join me indoors and save the outside box idea for another project.

Tuesday – the day of the official launch reception.

10 a.m. – two pyramids of dirt have been added to the streetscape just outside our location.

It is bitterly cold and working outdoors totally out of the question. One half of Wendy’s box has been erected inside. It’s very handsome, with red framing, and she is being cheerful about changing her plans.

I reminisce with some old friends: we try to reconstruct from our collaborating memories the King Street we once knew, with department stores, movie theatres and prosperous family businesses.

I photograph the street work to incorporate these images into my paintings.  Tomorrow will be a good work day.

It starts to snow.

We are invited to move to a more genteel location but want to stay where we are (not just for the rice balls either).

Sunshine, visitors, a good pace between work and talking about it. Anna is Oshawa’s version of The King of Kensington. She looks after various people in the neighborhood, her store a dropping in place for people going about their business. The man comes back with his painting and I take a picture of him proudly showing it off. He explains to me his teaching process at the residence, where he gets his students to copy his pieces. He says that he doesn’t know what he is doing but they seem to be enjoying it.

My current project is based on the word renewal, inspired by the banner advertising the Regent Theatre Renewal project across the street. Overnight its façade has acquired a mess of graffiti – not the clever Basquiat kind but the mook variety. Heated discussions ensue – should the committee use its limited budget to have the front cleaned when they are planning an entire restoration of it eventually? It is currently sporting a dated cerulean blue, from the days that the theatre was a dance club.  If they paint over the graffiti they are perpetuating this fairly nasty look. Someone from the city comes to photograph the vandalism.

Road is big big sandbox – and while we are attracting some attention with our artmaking, we are no competition for the big hole and giant Tonkas that draw crowds of onlookers.

Thursday evening T Star architecture critic Christopher Hume has been invited to lead a panel discussion at The Robert McLaughlin Gallery called “City Spaces Suburban Places.” Hume is challenging and controversial, tells the community to “get over” Colonel Sam and move on, to develop the waterfront, and hold an international City Hall competition to create a Bilboa effect. Other panelists David Miller  and Deputy Mayor Louise Parkes present responses to these imported ideas, and the audience bristles.

Visitors include two city politicians with interesting perspectives on local issues. (See Monday) Many are abuzz over last night’s talk. I think that this accentuates one of the advantages of a small city – the fact that something small can happen to larger effect, that the gallery, which gets all kind of criticism for not being relevant, can be a player in local issues.

The graffiti across the street remains a hot topic – to leave or remove, and the larger question of when to throw bad money after good. (or the other way around?)

Sunday preps for new work: the first one is  Golden days at the Genosha Hotel. Once a swank showplace, the Genosh descended to strip club status over the last twenty years. Recently sold, there are high hopes for its renaissance.

The second piece I am planning is Rundle House – the great bone of contention in the Cancer Centre controversy. City Council, the historical society, and a divided neighbourhood are abuzz over a planned Heritage District Study and the possible demolition of a wonderful old home by the Oshawa General Hospital Foundation.

Faces from the past come in to visit. We paint. Newell gives us each a mango from Jamaica. I bring in the colour print for our elderly gentleman-painter, and Anna puts it in a fancy frame as a present for him.

I wake up thinking it’s the weekend and then remember with pleasure that it’s a downtown painting day.

Very happy with my work but also with the daily traffic/random conversations, reflections on the site.

Several homeless, mentally ill, addicted, infirm or maybe just addled, troop past to the soup kitchen on the next corner. Here is an invisible barrier: they do not come inside the store. But if we are on the street they stop to talk. One man is a schizophrenic who has been an artist and traveled to east and west coasts to paint and sell his work but now has come home to live near his parents. A woman tells Wendy a sad story about her son. There is a sense that this work provides a catalyst for personal revelations.

Apparently a shooting has taken place this afternoon on the side street that we can see from our windows. Some storekeepers heard an altercation, but we were oblivious and only knew about it when Newell came in to tell us, and point out the police and yellow tape blocking off the road. It turns out that there was an argument and someone shot someone else in the foot. The next day the tape is gone and very little is made of the whole thing. But now we can presume that there are people in the vicinity who carry guns.

BrushStrokes is a hive of activity. Newell is a music producer and one of the tenants is a photographer who primarily shoots music groups. He and his partner, an interior designer, have 2000 square feet plus a rooftop in this wonderful old building. Back when it was home to the Alger Press offices, it housed the first sit down restaurant in town, its original terrazzo flooring indicative of where the café tables and long lunch counter once were.  A vintage elevator is no longer in use, but waits quietly for restoration.  A sense of history and place exists here that can’t be faked. One of our visitors tells us that her great grandfather was the mayor at the time that this building was built. Apparently after a fire the front was redone using the artisans that Colonel Sam had brought to Canada to work on his estate Parkwood. Apparently he persuaded some of the Oshawa gentry such as the Alger family to employ local men who had been trained under these stone carvers, thus the decorative façade spelling out The Alger Building, 1937.

The rich history, the mud, the clashing noise, the mixture of local politics and the bad, the mad and the sad, are a powerful stew for art making. Wendy and I both enthuse over the experience. We look for other locations within the downtown to exhibit what we have created.

That is what happened but not what it was ultimately all about.

Reverence for the past is not just nostalgia, although undoubtedly there is a sentimental component to the whole project. Intervention into a somewhat indifferent environment offers its own rewards. At issue are not only the site specifics that Wendy and I are interested in exploring and indeed confronting, but also the whole idea of who receives whatever it is that artists communicate.